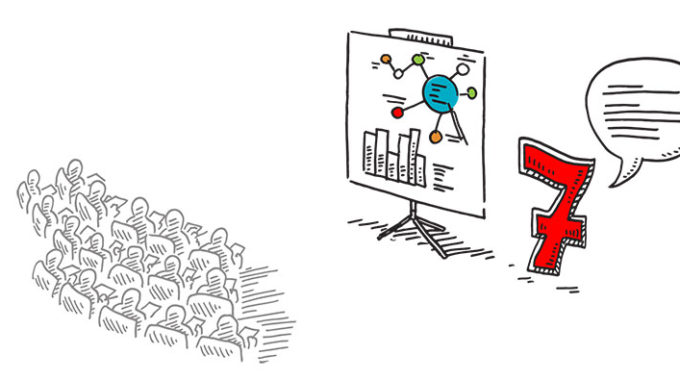 Contrary to popular belief, numbers can’t always speak for themselves. How we present them is the difference between effective communication and confusion.

The numbers 6, 20, and 1975 don’t mean anything on their own. However, if I add some context, they get a lot more interesting. For example, if I tell you that Angelina Jolie was born in 1975, married Jonny Lee Miller when she was 20, and has 6 children with Brad Pitt, those numbers suddenly have meaning and are a lot more interesting.

Numbers can have an important story to tell, but it’s up to us to help them tell it. Following are some simple tips to help you present numeric information so that it emphasizes what’s important.

Start by organizing the data in a logical order. In the following table, all of the data is there, but the reader has to work to figure out where the real story is.

According to Sally Bigwood, one of the authors of The Designer’s Guide to Presenting Numbers, Figures, and Charts, the golden rule is “always present data for the convenience of the reader.”

So let’s help readers of this table see where the high and low points are. Table 1 is organized by alphabetical order of the categories. If we arrange the data by quantity of sales instead, a more compelling story begins to appear.

Arranging data by size helps the reader make comparisons and reveals patterns and exceptions. For example, in Table 2, the reader is more likely to spot the significantly higher sales of orange widgets in Regina than in Saskatoon, and the fact that only black widgets sell better in Saskatoon than in Regina.

The most common arrangement is largest to smallest. Usually, the larger the number, the more important the item is.

Besides, when you arrange data from largest to smallest, it’s easier for people to subtract the smaller number from the larger one above it and figure out the difference between them.

Why make your readers waste time trying to figure out what the numbers mean, when they could be spending that time doing something with the information? 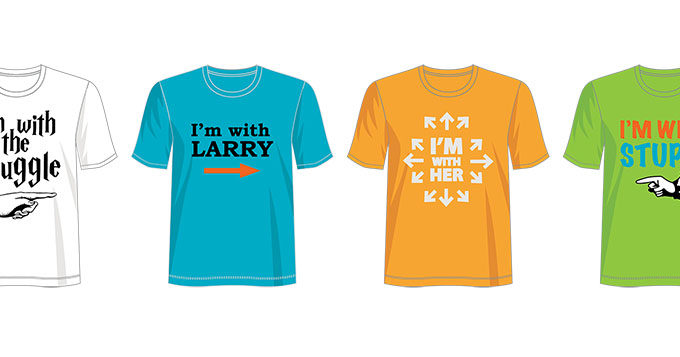 The human brain is a wondrous and efficient thing. It’s always looking for ways to cut corners and process information quickly.

If you’re a clever communicator, you can take advantage of the brain’s inclination to jump to conclusions. For example, if you place things close together, your reader’s brain will assume they’re connected in some way. This association happens subconsciously without the reader actually thinking about it.

Let me demonstrate using the following series of dots. They’re spaced evenly — there’s nothing about their placement that suggests any sort of association between them.

By moving the dots closer together horizontally without changing the vertical spacing, the brain subconsciously decides that the dots that are closest to each other much be related. It assumes they’re rows of dots. 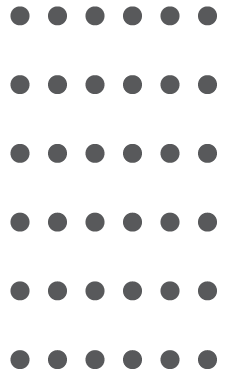 If, instead, we move the dots vertically closer without changing the horizontal spacing, the brain decides they are columns of dots. 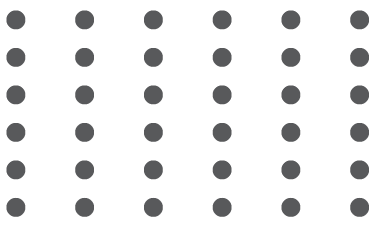 Let’s try something else. What happens if we move some of the dots away from the rest of their pals? 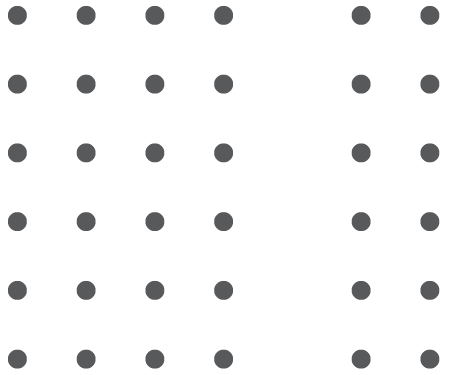 The simple addition of a bit of space creates the impression that we have two separate groups.

But what does any of this have to do with effective communication? If we look back at the examples from our last blog post, they’re actually a pretty good illustration of how these principles work with words, not just dots.

We started with a simple piece of text intended to advertise a musical performance. When all the words were the same size, and there was no spacing to distinguish between the different types of information, it was all one big block of uninviting text. 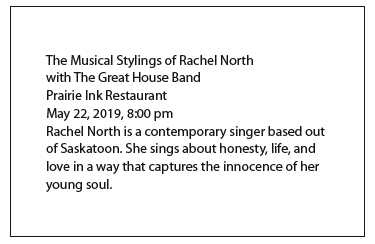 However, when we introduced some space around the different types of information — the name of the performers, the time and location, the description — these distinctions immediately became apparent. 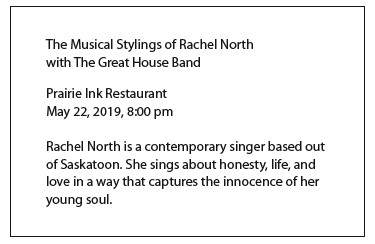 This is not complicated design at work here. We used proximity and white space to help the brain jump to the conclusion that the words that were closer together must be in groups and that they must be related. The reader didn’t have to consciously think about it.

Clear-design principles make it easier for readers to understand your message, so you communicate more effectively. It’s a win-win. 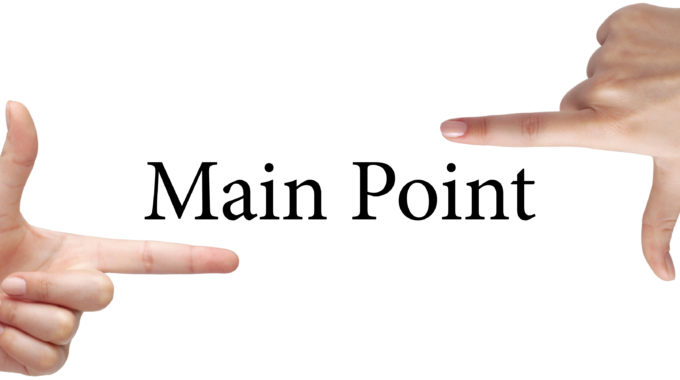 People appreciate it when you make things easy for them.

So don’t make your readers work too hard to navigate your content. Whether you’re creating a webpage or writing an email, you can use simple design principles to make the text easier to navigate.

For example, use lots of white space. Break up your text into smaller chunks and leave lots of room around the various elements so that they stand out.

But isn’t that just wasted space?

No! White space is one of the most valuable tools in design. It literally creates space (air) in the design and makes your content lighter and more inviting to read.

Did you hear that? It was a big sigh of relief from your readers after you injected some breathing room into your content.

Let me demonstrate with this simple piece of text intended to advertise an event.

In this first example, all of the necessary information is there, but it’s hard for the reader to find the various elements — date, time, location . . . Even the name of the performer gets lost.

Let’s inject some space in between the various parts.

Already the text is easier to navigate and all we’ve done is add a little extra space.

Let’s take it a step further. Without changing a single word, using nothing more than bolding, text size, and white space, we can highlight the most important information. 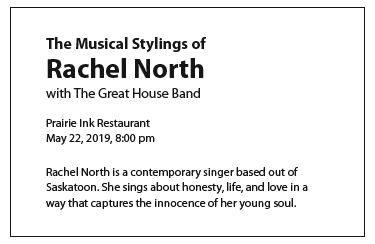 See how simple that is? You don’t have to be a graphic designer to use simple design principles that make it easier for your readers to find what they need.

In future posts, we’ll talk about other simple techniques that will help you serving the needs of your readers create more effective communication. 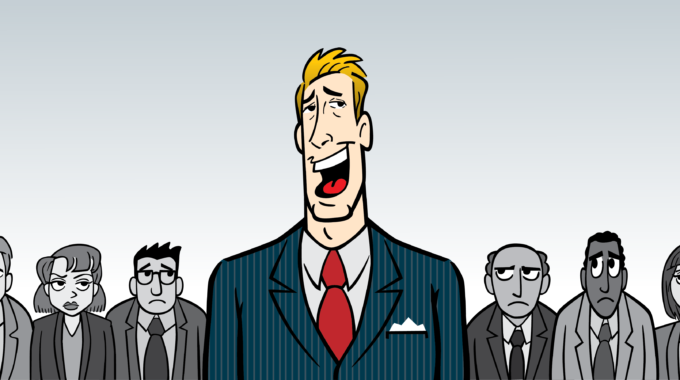 Have you ever been stuck talking to a blowhard at a party or networking event? All they can talk about is I, I, I … me, me, me … If you’re like most people, you can’t get away from them fast enough.

When your writing is all about you, and not about the people you’re writing for, your readers feel the same way. Following are some plain language tips to help you better serve your readers and communicate more effectively.

Think about the person, or group of people, who will be reading what you are writing:

When you write with these kinds of questions in mind, your content will reflect the interests of your readers — they will see themselves in what you are writing and give you their attention.

Think about your purpose for writing and the questions your readers might have. Make the answers to those questions easy to find.

Avoid the “curse of knowledge”

If you are like most writers, your instinct is to write about what you know from the comfort of your own perspective.

If you’re an expert in your field, it can be hard to write clearly about your area of expertise. You and your colleagues share a shorthand of jargon and abbreviations that make for efficient communication among yourselves. But your readers often won’t share your understanding.

You need to step outside of your insider knowledge when you present your ideas to others. Use common, familiar words when possible and explain complex terms or ideas when necessary. Provide examples that your readers can relate to.

Look critically at your writing and flag any terms or ideas that might be confusing or unfamiliar to your readers. Ask an editor (or someone who is representative of your audience) for feedback.

Speak directly to your readers

As we’ve already established, this isn’t about you; it’s about the reader. Speak to them directly – use “you” to help them relate to what you’re saying.

Your document may ultimately be read by a great many people, but you should write for each individual reader. Writing with a specific person in mind forces you to consider their needs.

Plain language is clear, concise, and well organized. The advice above is all based on plain language principles. The objective is to tell your readers what they need to know in language they can easily understand.

It’s all about them. 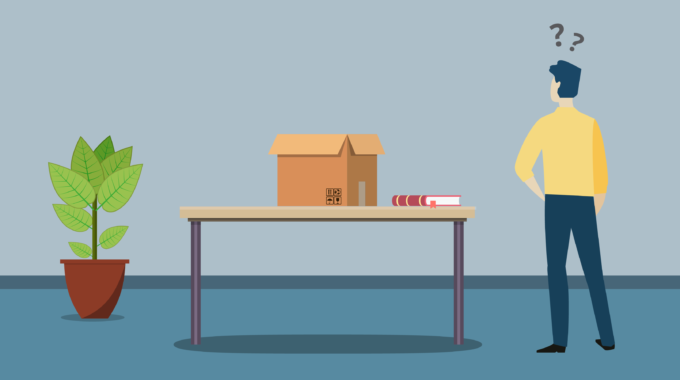 Put the book in the box in the kitchen.

This writer is leading you down the garden path. Although the sentence is grammatically correct, its meaning isn’t clear. It would be easy for you to misunderstand what the writer is trying to say.

Is the book already in the box? Or are you supposed to put the book in the box that is in the kitchen? We can’t tell from this sentence.

Sometimes a sentence seems to mean one thing in the beginning, but by the end you realize that it means something else entirely. This ambiguity is often caused by a homograph, a word that has the same spelling as another word but has a different meaning. Here’s an example:

The complex houses married soldiers and their families.

The word “complex” could be an adjective that describes something complicated, but in this sentence it’s a noun meaning a group of buildings or facilities.

At the same time, “houses” could be a noun meaning buildings that people live in, but in this case it’s a verb that means to provide shelter.

The real confusion happens when readers come to the word “married.” Your brain, in a hurry to process the meaning of the sentence, assigns the most common meaning to the words it comes across.

But how can houses get married?

Indeed! At this point, most readers will stop and go back to the beginning of the sentence. This time they will take a little more time and pay closer attention.

In this context, “married” is not acting as a verb; it’s an adjective describing the soldiers. The sentence is trying to say this:

Married soldiers and their families live in the housing complex.

Being clear is not always easy. Clear writing takes effort, but everyone can learn how to spot potential ambiguity and craft clearer sentences. A good place to start is using plain language.

Plain language is writing that is clear, concise, and well organized. Its wording, structure, and design make it easy for intended readers to

Comment below or email us at info@3cpublications.ca.
© 2022 3c publications Inc. All Rights Reserved.
Back To Top